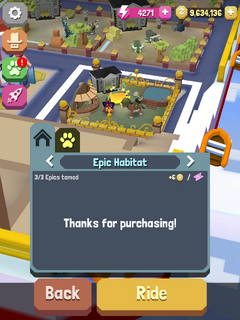 Epic animals, also known as IAP animals, are animals which can only be obtained through in-app purchase (IAP), using real money. They all impact the game in a positive way, and are also playable in game, but are not found naturally in the stampede. There are currently five epic animals. When epic animals are purchased, they appear in an isolated habitat to the right of the Shop which automatically has the appearance of something similar to a combination of a level 8 & 9 habitat. The epic habitat cannot be upgraded, and since it cannot be upgraded, epic animals do not have the ability to earn bonus coins in the stampede.

While epic animals may resemble animals of other species, such as the Cash Cow resembling a buffalo, they are of their own species, in which they count as a separate species in missions where the player must ride a certain amount of different animals in a row/in one run.

Retrieved from "https://rodeo-stampede.fandom.com/wiki/Class:_Epic?oldid=46278"
Community content is available under CC-BY-SA unless otherwise noted.