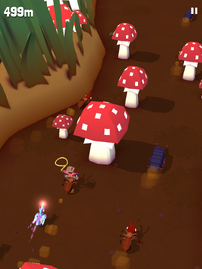 Garden is the eighth zone released in the game, in version 1.15.0 on the 21st of March 2018. It is the third Space Zoo zone, requiring missions to upgrade the ship and habitats, and

to play. It is unlocked when the player reaches Outback 3 in the Sky Zoo, or can be unlocked prior to this via purchase in the Shop. Its only new feature is the addition of webs strung across the stampede in various places, which jolt (slow the player for a short moment) the player slightly when riding a ground level animal, and trigger the appearance of spiders running in from behind to eat the player like tyrannosaurus rexes. Other features include mushrooms for trees and miscellaneous objects such as coins and cans as rocks, overhanging rocks and acorns as the collectible.

For specifics on each part in Garden, see the table below. 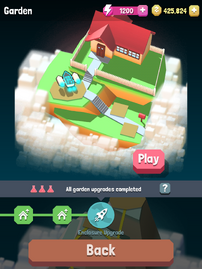 Garden is a difficult zone for starters due to its severe lack of animals with good attributes and abundance of obstacles, such as mushrooms (trees) and rocks. Webs, while altering the player's motion slightly, do not affect the player themselves too greatly, and are really only a minor inconvenience. Spiders are also a constant threat due to its very quick pace when chasing, arriving swiftly after a web is run into, catching the player unawares. The fact that ants lurch the player back slightly before throwing them off increases the chance of being eaten. Grasshoppers are abysmal to begin with, with it being almost impossible to turn with control until it is upgraded to level 6. Additionally, the first 1000m of Garden is difficult due to the darkness of the ground, where the player should turn up their brightness on their device in order to see obstacles better. Overall, to get a high score, the player must play through enough to upgrade their grasshopper habitat greatly, as well as jump as early as possible upon running into a web when on an ant. Players can also use beetles and centipedes for short bursts that allow the player to be invincible to almost everything and resistant to animals respectively.

Retrieved from "https://rodeo-stampede.fandom.com/wiki/Garden?oldid=64360"
Community content is available under CC-BY-SA unless otherwise noted.