Start a Wiki
Glitches and bugs are faults in the game's system, which can occur when certain things are done.

Rodeo Stampedia takes no responsibility for the outcome of any of the glitches described and whatever damage they may cause.

Even animal species have ended up having bugged models, as lions have larger lips, eagles have a line on their chest and bears have two lines on their lower jaw.

The UFG, as it is missing its antennas, could also be a bug, but this could also have been intended.

When animals, such as elephants and particularly walruses throw players off, the distance is much lower than should be, with every occasional (around once every 50) throw/hit being the correct distance. This particularly has led to the mission where the player must jump 110m off a walrus almost impossible, with the player only being able to jump 29m.

There was no known cause for this glitch, since it only happened randomly. The glitch made the gameplay slow, and also removed the music. It was infamously used in the Raptor Challenge to get high scores, but has since been fixed.

On some devices, there was a bug where the player could not smash windmills or outhouses, no matter what animal they were riding. In fact, all animals were able to pass right through as if they were not there. This bug was fixed in version 1.19.2.

The exact cause of this glitch is unknown, but if the player does the unknown requirement, sometimes the player can be seen to be riding a golden ostrich. There are no obstacles, animals, or walls while riding it, so when this glitch occurs, it can easily allow the player to achieve a new high score.

This glitch happens when any eating animal (e.g. lions, bears, drop bears), apart from tyrannosaurus rexes and spiders, eats the animal that the player is riding. It will make only the surface visible, and will bring the player back to to a negative distance (e.g. -100m).

Credit to D3ath Angel - Games for the name.

This was one of the most annoying bugs. When the player logged into Google Play and entered Rodeo Stampede, the game would lag a little. Then a loading circle would appear and the game would freeze, and it would then return to the title screen. The player could see that the cruise had been reset and they did not gain any

This glitch is one of the most helpful glitches. To make it happen, the player must change the date and time forwards or backwards, and then open Rodeo Stampede again. Doing it forwards allows the player to open the Zoo repeatedly and get many cruises, as well as skipping breeding times and getting new missions. Doing it backwards allows the player to return to recent events that have passed. However, advertisements cannot be viewed when in a different time from that of the actual, current time because on internet connection problems. This glitch can also be used to find new endangered animals that haven't been found before by constantly changing day to find the required animal. Recently, this glitch has also given boss missions which become visible after the player's first run. However, this is inconsistent so getting boss missions may require multiple attempts. It is important to return to the correct time after using this glitch, as there is a risk of the app re-updating if the time is incorrect.

In Mountains, if the player falls off the cliff and hits a free-standing rock which eagles perch on, the game will register it as the player dying twice. The 5 second countdown will occur twice if the player hasn't used a revive, and will cause revives used to fail. This worked best when the player is riding an eagle.

This was one of the most annoying bugs. If the player exited the game or exited the Space Zoo, there was a chance of Space Zoo missions resetting, meaning that if the player had completed 2 of the missions and was just required to collect 1 more egg, they would have to do start their missions again, with 3 new missions. This bug has since been fixed.

This bug happens very rarely, and has no known cause. In Mountains, the player can occasionally see bugged eagles at the cliffs. Some are floating, sometimes there are two eagles on a single rock and if the player gets on a Robin Should, many floating Robin Shoulds can be seen.

This is by far one of the weirdest bugs ever. It is also similar to the negative distance glitch. To make it happen the player must play in Jurassic and reach 1000m, where volcanic rocks are found. If an animal gets hit by a volcanic rock, the player must quickly lasso that animal. After that, the game will freeze for a short time and then the background will change to a tan colour. Then, multiple Jurassic animals will be seen with some parts inside and outside each other, creating a "hybrid". The player can then be seen floating and will disappear after a few seconds. If the player taps the screen, they will die.

In version 1.12.0, there was a bug which occasionally occurred in which when the player lassoed an animal, they would die with the "zoo/retry" screen coming up, however the animal would still run and the player could keep playing in the same run, albeit with the player in the position where they are flat on the ground in a star shape. Furthermore, if a new animal was tamed while this bug was occurring, after taking a picture, the camera would be set behind the player when running in the stampede.

Sometimes, for no reason, the player can't steer at all on all animals, excluding penguins.

Can Only Watch Edit

Occasionally, when the player dies, the revive counter, "Retry" and "Zoo" buttons won't appear, but the stampede keeps running. It is possible to see animals that the player has passed, as well as random ones. The music also stops. This glitch often happens before and after an advertisement is watched. If the app is closed and reopened, any animals matched in the previous run will be lost.

In some runs, the music plays quietly for a moment, then it stops. When the player lands in the stampede, all that can be heard are animal sounds, fire, lightning, crashing, volcanic rocks, ghosts and background sounds.

When a rock with a vulture perched atop it is smashed, the vulture and its nest remain as they were while the rock is smashed, meaning the vulture floats. Previously, vultures would fly up in the air when their rock was smashed, however, the nests have always remained in the same spot. This animation was removed at an unknown date.

If the player is riding an animal which can eat other animals, (for example, lions and bears), and they finish eating an animal and crash at the same time, the animal will move an extra metre, then fall asleep, as if it ate the player.

There is a glitch that sometimes occurs upon the successful taming of any llama, where after the picture has been taken of the llama, the screen will flip to a view where the player is facing the llama, and the game will continue this way. After the player dies, everything will seem normal if they return to the zoo. However, if they press play from the zoo, the player will spawn at the final area of the Hyper Light Llama boss mission, and the screen will show a view from the front point of view. The player can control the animal they are riding until they die. This will continue until the player manually changes maps. 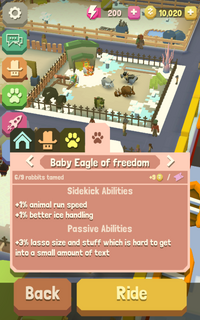 When the player taps on any habitat and clicks on the animal or baby tab before any animals come out, the "Eagle of freedom" will be shown, more specifically, right after loading the app. The description is identical to that of the Cape Buffalo, and its baby attributes are as follows:

The Eagle of Freedom could be:

In version 1.16.0 on the 10th of May, three new Garden animal species were released, only to not appear in the game.

Although this glitch occurs quite rarely, it can be very annoying. When the player crashes in a Space Zoo zone, sometimes glitch missions occur. It is unknown whether any other glitch missions exist, apart from the ones pictured on the right. The missions may be data for an upcoming, unused zone or unused data from a current zone, as the only evident cacti in the game are on the Mesa Moose.

When the player is riding any beetle, there was a small chance that they will crash after attempting to smash a pillbug. This has since been fixed.

During the 2017 Chinese New Year Event, animals were appearing in areas that they weren't supposed to appear in. For example, rhinos appeared in Jungle 2. This was fixed when the event ended.

On a butterfly, the player was able to ride for an unlimited distance. This could be achieved by starting on a butterfly, waiting for it to get angry and swoop to the ground, before finding a cliff and flying off the edge, to fly off the side of the stampede where no obstacles could be found. The butterfly would fly level with the ground, meaning that it would not fall. This allowed players to set extremely high scores.

This glitch happens randomly. Sometimes, the player will encounter an immobile match symbol with nothing underneath it. When the player tries to jump on the invisible animal, it will act as though nothing is there.

). To do this, the player had to enter either the Metalsaurolophus (Jurassic), Dark Pegasus (Olympus), Grassknotter (Garden) or Little Yellow Chicken (Great Wall) missions, with 0

. Then, the player could pause or crash, so that a menu with the option "Return to Jurassic/Olympus/Garden/Great Wall" (depending on the mission) could be tapped. From there, the player would enter the Space Zoo zone and be able to play without any

When traveling on an angry ostrich while pushing into the left or right sidewall, after 15000m, The player may glitch into the sidewall and onto the other side of the wall, where they would be able to run infinitely.

When the player enters any spot with water (river, swamp, pond) on a charging moose, the charging animation will be halved. This is only a visual glitch and will not affect gameplay.

Buffalo have been bugged in many recent updates (as of version 1.27). Occasionally, when the player jumps on an upgraded buffalo, the charge streaks do not disappear after it stops charging. After this, the player would find wild buffalo with charge streaks around its front in the stampede.

Retrieved from "https://rodeo-stampede.fandom.com/wiki/Glitches_and_Bugs?oldid=58031"
Community content is available under CC-BY-SA unless otherwise noted.