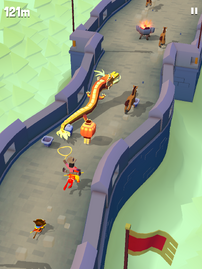 Great Wall is the ninth zone in order of release in the game, and was released in version 1.22.0 on the 28th of January 2019. It is the fourth Space Zoo zone, requiring missions to upgrade the ship and habitats, and

to play. It is unlocked when the player reaches Tundra 3 in the Sky Zoo, or can be unlocked prior to this via purchase in the Shop. Between the 4th and 26th of January 2019, the player could also unlock Great Wall in the limited Chinese New Year shop, for 300

. Its new features include clusters of arrows being shot from the left side, with warning, with the player dying upon impact and lanterns to collect. Great Wall also features a mostly man-made terrain, with rocks and trees instead being replaced by statues and wooden structures, and shrubs being replaced by ceramics. Other features include short walls, which often meet at right angles which monkeys can vault, large imperial style buildings or temples in the centre of the stampede, and stairs which the player can pass under on either side.

For specifics on each part in Great Wall, see the table below. 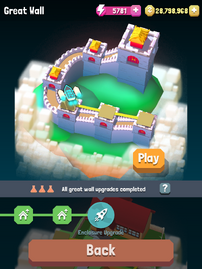 Great Wall is a fairly difficult zone, with the narrow nature of the stampede and presence of arrows providing challenges. Often, the player can use monkeys to vault obstacles to counter this, or use Chinese dragons to go on a rampage. Kirins, which can jump off the side of the wall, and roosters, which can fly up and avoid the stampede, also offer some safety. However, the best ploy is to use pandas whenever possible, due to their slow speed, invincibility against most animals, good control and ability to not reduce the player's lasso size. Another good strategy is to jump from animal to animal constantly if there are no pandas present, as all animals' angry mechanisms are unfavourable in Great Wall. The player must be especially wary of the fact that arrows are shot from the left side at all times, with jumping in the air to the left of the marked danger area for arrows causing the player to crash. However, if the player jumps directly over the danger area, they will be safe.

Retrieved from "https://rodeo-stampede.fandom.com/wiki/Great_Wall?oldid=49528"
Community content is available under CC-BY-SA unless otherwise noted.