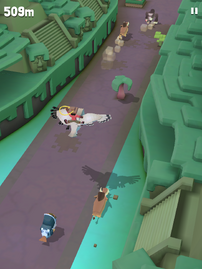 Jungle is the second zone in Rodeo Stampede and in the Sky Zoo. It can be unlocked when the player upgrades their ship from Savannah 5 to Jungle 1. The ground is mainly a brown colour to make it resemble the jungle, but turns green between 1000 and 2000m and black after 2000m. It has smooth walls to make it easier, and features large patches of water and alligators which will attempt to eat the player, although these can be lassoed and befriended. The walls in Jungle are low and feature rows of trees, stone heads and steps seemingly leading to a ruin or a temple on each side, and the playing area is usually quite narrow. As of version 1.7.0, large central rocks featuring layered canopies of trees stepping up layer by layer were included.

For specifics on each part in Jungle, see the table below. 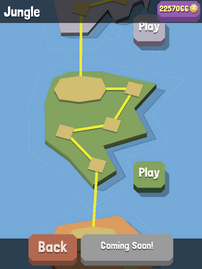 One major tip for high scores in Jungle, like in Savannah, is utilising the animals. Certain animals in Jungle are more useful than in Savannah, but some in Jungle have major catches. It is recommended to use a gorilla, a toucan or a rhino before 3000m, each with their own reasons. Gorillas carry the player a long distance, and are invulnerable to obstacles and invincible to everything apart from walls when in mid-air. Toucans are animals which have good speed and are fairly easy to control in Jungle before 2000m as there aren't many obstacles. Rhinos are simply invincible, but will throw the player off after a fairly short amount of time. The benefit to rhinos is that they speed up after smashing anything, so they can carry the player a decent distance as well. After 3000m, with a highly upgraded hippo, the player can become almost invincible and travel in excess of 10000m on a single hippo, as they charge whenever they come into contact with water, and the water patches after 3000m are easy to get to.

Retrieved from "https://rodeo-stampede.fandom.com/wiki/Jungle?oldid=60876"
Community content is available under CC-BY-SA unless otherwise noted.