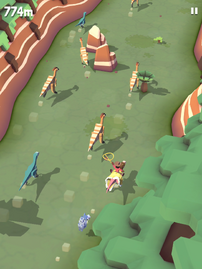 Jurassic is the sixth zone released in Rodeo Stampede, released in version 1.8.0 on the 18th of May. It is the first zone in the Space Zoo, and features habitat upgrades and stages unlocked by completing missions, as well as energy (

). Along with the Space Zoo, Jurassic is unlocked when the player reaches Jungle 3 in the Sky Zoo. It can also be purchased prior to reaching Jungle 3 with real money in the Shop. Jurassic's most notable features include eggs to collect, volcanic rocks which fall with a glowing area beneath before landing, and streams running across the map. Jurassic also has cliffs on either side, but has smooth walls which make it less likely to die upon impact. Jurassic begins green, before changing to a blue theme from 1000m to 2000m, where it becomes red.

For specifics on each part in Jurassic, see the table below. 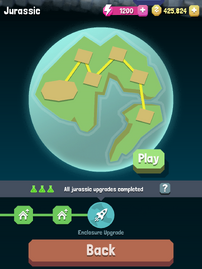 Raptors and pterodactyls make good starting animals as they are capable of speed, carrying the player a long distance. After around 2000m, triceratops are very effective as they can smash obstacles for a short period of time and do not reduce the player's lasso size. Stegosauruses, dimetrodons, ankylosauruses and parasaurolophuses are not recommended for either not having many positive abilities that greatly affect the player, not allowing the player to remain on one for a long time or being hard to control and use. Brontosauruses are very useful once they can smash rocks, but the player must be wary of the possibility of tyrannosaurus rexes running up from behind and eating the player while the brontosaurus slings its neck back. Tyrannosaurus rexes are completely indestructible, making them fun to use and a guaranteed distance carrier, even though it may not be a particularly long distance.

Retrieved from "https://rodeo-stampede.fandom.com/wiki/Jurassic?oldid=61116"
Community content is available under CC-BY-SA unless otherwise noted.