Missions are objectives which the player must complete a certain increasing amount to unlock boss missions or to unlock habitat and ship upgrades in the Space Zoo. Missions can be completed for different purposes in the Sky Zoo and the Space Zoo. 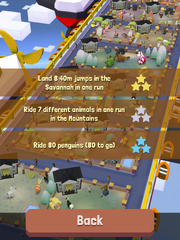 In the Sky Zoo, missions give coins (

) and count towards the amount of missions needed to unlock the next boss mission. They are rated by stars, being either 1, 2 or 3 stars, where 3 star missions are the most difficult and the ones that give the most

, and 1 star missions being the easiest but the ones that give the least

. Usually, missions are given to the player every 6 hours, however with a Mission Mule, the player gets unlimited missions instantly. The player can also watch advertisements to generate new missions or replace missions that they are stuck on if they have wi-fi or mobile data. 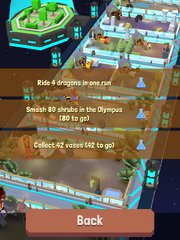 In the Space Zoo, missions count toward to amount of missions needed to unlock the next boss mission, as well as every three completed missions counting toward a new ship or habitat upgrade. Missions appear in 3 instantly, with the player only able to get new missions once all three missions given have been completed. In all Space Zoo missions, the player is required to collect a certain amount of a collectible exclusive to that island, such as eggs in Jurassic, vases in Olympus and acorns in Garden. The player cannot skip or replace Space Zoo missions.

Retrieved from "https://rodeo-stampede.fandom.com/wiki/Missions?oldid=59718"
Community content is available under CC-BY-SA unless otherwise noted.