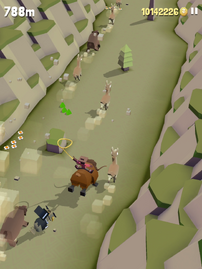 Mountains, previously known as 'Mountain', is the third zone in the Sky Zoo and the fourth unlocked in Rodeo Stampede, and introduces the new challenges of cliffs and jagged walls. It can be unlocked when the player upgrades their ship from Jungle 5 to Mountains 1. The overall colour scheme is mainly a greenish-greyish colour to make it look like a mountain, but turns a richer green and lighter grey between 1000 and 2000m and purplish after 2000m. It has rocky walls, making simply going near a wall a risky ploy, and features sections without walls on both sides at a time which the player can fall off, as well as extremely narrow sections. A few metres away from the edges which the player can fall off are tall rocks which eagles can be found perched upon.

For specifics on each part in Mountains, see the table below. 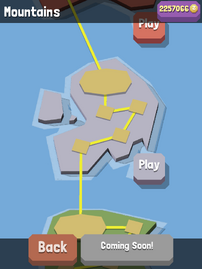 Upon release, Mountains was designed to be the most difficult map and a challenge to even the best players, hence, the animals in Mountains were specifically designed to be slightly nerfed, and overall difficult to use. There have been many strategies to get high scores, but what is recommended is to use a flying animal up until 2000m to avoid the majority of the narrow sections and the danger of walls. From there, it is recommended to use slow animals, in particular bears and goats when not angry. Llamas and moose can also be utilised as they do not reduce the player's lasso size when their habitats are upgraded. Occasionally, if seen, eagles can be ridden after 2000m to increase the player's distance by at least another 500m. Yaks, angry wolves and angry moose are not recommended for high distances as they are difficult to control due to uncontrollable bucking movement and speed respectively, but they can be useful in an area with many obstacles.

Retrieved from "https://rodeo-stampede.fandom.com/wiki/Mountains?oldid=49710"
Community content is available under CC-BY-SA unless otherwise noted.