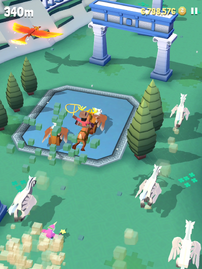 Olympus is the seventh zone released in the game, in version 1.10.0 on the 18th of August 2017. It is the second Space Zoo zone, requiring missions to upgrade the ship and habitats, and

to play. It is unlocked when the player reaches Mountains 3 in the Sky Zoo, or can be unlocked prior to this via purchase in the Shop. Its new features include lightning being zapped from the sky with a pre-warning, with the player being burned upon indirect impact, or instantly killed upon direct contact with lightning, vases to collect and classic Greek structures around the map. Other features include walls which are jagged in appearance, but are programmed so that the player can run along them without dying, and small pools of water around similar to Outback.

For specifics on each part in Olympus, see the table below. 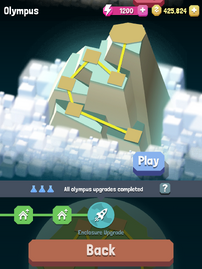 Olympus animals are all useful in some way, despite lacking habitat upgrades which improve the animals' physics compared to Sky Zoo animals. Before 2000m, it is recommended to use a phoenix as they move fast and grant the player a chance to survive if it hits an obstacle or an animal. After 2000m, where there are many groups of lightning strikes, it is best to jump from hind to hind, particularly after the hind habitat has been upgraded to level 3 as the player's lasso size will not be reduced and it is easier to run through water pools if hit indirectly by lightning.

Retrieved from "https://rodeo-stampede.fandom.com/wiki/Olympus?oldid=64490"
Community content is available under CC-BY-SA unless otherwise noted.