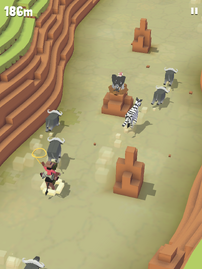 Savannah is the first zone that the player unlocks in Rodeo Stampede and in the Sky Zoo, and is unlocked by default after the player has befriended their first buffalo. It is mainly a golden-green colour which makes it appear similar to the African savannah, and the map is slightly darker as the player travels to 1000m and again at 2000m. It has smooth walls to make it easier, and features rivers running horizontally along the stampede area and giant rocks that appear in either ones (in the centre) or twos (slightly smaller; one to one side, another just after it to the other side). The walls of Savannah are high and stepped, and the stampede area is generally a decent width. It is considered the easiest island in the game.

For specifics on each part in Savannah, see the table below. 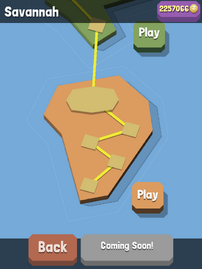 One major tip for high scores in Savannah is utilising the animals. Every animal in Savannah is extremely useful in one way or another. Early on, the ostrich is highly recommended due to its speed, its ability to grant the player a second chance if the player crashes and the fact that it can hug the sidewalls without crashing. Later on, giraffes are very useful as they can knock into other animals without immediately dying and can fling the player a long distance with a hugely increased lasso size, meaning that the chances of missing an animal with a well-directed jump are extremely low. Zebras are also a useful asset, with the player being able to ride them without their lasso size shrinking from level 3. Once past the 2000m point, using lions is recommended, for past 2000m there are lots of animals, allowing the player to ride lions for an extended period as well as avoid crashing into objects.

Retrieved from "https://rodeo-stampede.fandom.com/wiki/Savannah?oldid=60875"
Community content is available under CC-BY-SA unless otherwise noted.