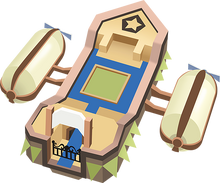 The Sky Zoo is the hub for all animals from Savannah, Jungle, Mountains, Outback and Tundra. It features an airship powered by propellers in a blue sky with clouds, and houses 36 habitats, as well as the breeding pen and parks. At the entrance, to the left is the shop and to the right is the epic habitat. The Sky Zoo's appearance changes every time a new area is unlocked, most noticeably from the front of the ship when the player is shot down to the stampede via a cannon. When there are visitors,

can be found which give a small cash bonus. All Sky Zoo zones are based on real life environments with real life base animals.

The Sky Zoo is free to play in, but requires

to upgrade the ship, its habitats, and to explore new areas and zones.

Retrieved from "https://rodeo-stampede.fandom.com/wiki/Sky_Zoo?oldid=60889"
Community content is available under CC-BY-SA unless otherwise noted.