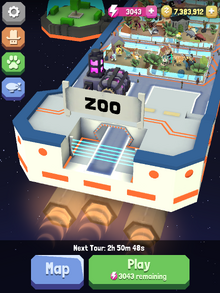 The Space Zoo was released in version 1.8.0 on the 18th of May 2017. It can be unlocked when the player upgrades their Sky Zoo to Jungle 3, or when any Space Zoo zone is unlocked through a purchase with real money in the Shop. It is the hub for all Jurassic, Olympus, Garden and Great Wall animals. The Space Zoo is a rocket ship with an open top, powered by several rocket boosters at the entrance of the zoo, set in space. Its appearance changes slightly after each ship upgrade to explore new areas and zones. At the entrance to the left is an energy (

) generator. When entering the stampede, the player is fired through a purple portal, suggesting the travel to a new dimension or time period. When there are visitors,

can be found which give a small cash bonus. Overall, the Space Zoo has a futuristic look, with fences for habitats and the entrance gate being made of blue lasers. 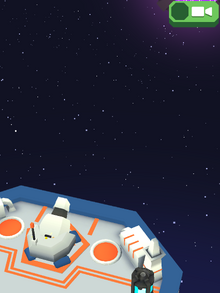 ) to play, a system where each run costs a certain amount of

which is decreased as some Space Zoo animal habitats are upgraded.

is lost as time, as opposed to distance, elapses. The only ways to increase the player's

amount is by opening the zoo for business, where 100

(200 if an advertisement is watched) is earned, or by spending

, but if it is purchased with

, the player can hold as much as they want.

The player must do the same to unlock new areas, except they can only upgrade the ship every 3 mission sets of 3, or every 9 missions.

Once the player unlocks and fully upgrades all habitats in that zone, they will receive one final mission set. If it is completed, nothing happens, and after that, no more mission sets will appear for that zone. The player does not need to finish this final mission set as it serves no purpose and would be deemed a waste of

Note: All Space Zoo zones can be purchased with real money in the Shop before reaching the areas below.

Retrieved from "https://rodeo-stampede.fandom.com/wiki/Space_Zoo?oldid=53347"
Community content is available under CC-BY-SA unless otherwise noted.