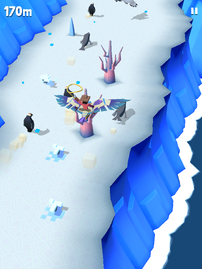 Tundra is the fifth unlockable zone in the Sky Zoo of Rodeo Stampede. The area is characterized by icy terrain with hardened puddles and bare trees. Ice patches are introduced as a new environment modifier where certain animals like penguins and walruses adapt better compared to the rest of the horde. Another new introduction is the inclusion of walruses suddenly jumping out of the sidewalls and occasionally, the single centre rocks past 2000m, in which the player dies if they hit one. It can be unlocked when the player upgrades their ship from Outback 5 to Tundra 1. The domineering colour scheme of Tundra initially proceeds from light blue or cyan, abruptly transitioning into to a darker blue between 1000m and 2000m, and finally peaks at purplish hue beyond 2000m distances. Strategy-wise, it has rocky walls rendering the evasive manoeuvre of steering near the edges of the path a risky ploy. It also features sections without walls on both sides wherein the player can easily fall off, extremely narrow sections, and giant boulders blocking some to most of the mid-section of the path found between the starting line and 1000m, and beyond 2000m as well. Off the side of the stampede area are icebergs with varying sizes used mainly for aesthetics and does not in any way affect the user's gameplay.

For specifics on each part in Tundra, see the table below. 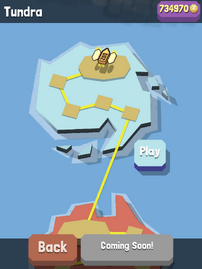 Tundra is not as difficult as Mountains or Outback, but there are still some tricky areas, especially with ice. For the first 4000m, it is recommended to use an owl due to their speed and versatility. Tundra does not feature many obstacles, so its is easy to use an owl's ability to smash small animals (all except walruses and polar bears in Tundra) and go very far on a single owl. Once the player is past approximately 4000m, seals and polar bears are recommended, seals for their ability to slide on ice and smash other small animals and polar bears for their ability to eat any other animal and move at a steady pace. Walruses are also recommended but they are hard to lasso when travelling at high speed.

Retrieved from "https://rodeo-stampede.fandom.com/wiki/Tundra?oldid=64252"
Community content is available under CC-BY-SA unless otherwise noted.